The grammar school I went to got a kiln and a stand-up and nod kick wheel when I was 13. No looking back!

When I was 16, I was out on my bike in Tisbury, Wiltshire, and came across a watermill where Oldřich Ašenbryland and a slipware potter were working. I didn't meet them, just looked at the shop. Inspired for life.

I completed a Foundation Course and studied Ceramics at Cardiff College of Art during the 1970s. I worked as a thrower for John Hughes (the Groggs man) in 1974 and as a workshop assistant for David Frith in 1977. 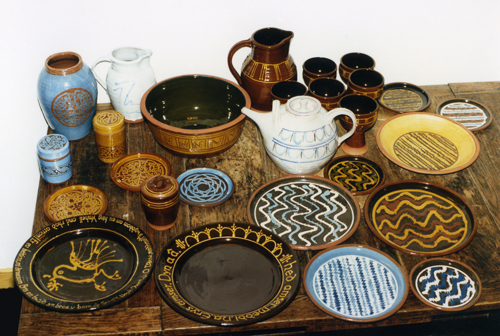 I established my own workshop in 1981 in Nantlle and I had my first exhibition (of slipware) in 1983 in the showcase in Wrexham Library. In 1987 I had an exhibition in Oriel Bangor, sharing the space with Anglesey Weavers, and took part in many North Wales Potters' exhibitions from 1982–1998. I was on the committee of North Wales Potters for twelve years and also represented them on the Aberystwyth International Ceramics Festival committee and Wales' Craft Forum.

I moved to Garndolbenmaen in 1989 and worked at and for Porthmadog Pottery as a designer and producer from 1995 until I moved to Barry in 1998, to work in Canon Hill Pottery factory, before returning to Cardiff in 1999.

I was part of 'Artaspects' in Treforest Village until it came to an end, and have managed to re-establish my own workshop since moving to Cwmcarn. In 2006/2007 I worked for Gareth Lloyd of St.Fagans Pottery, modelling sheep. 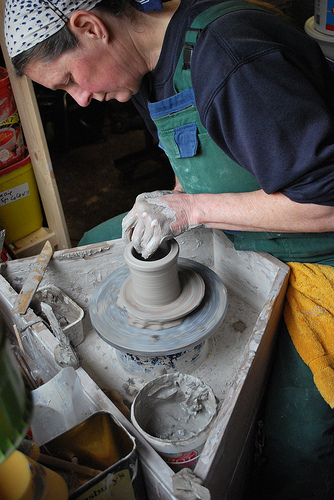 I then worked at home and shared a salt glaze kiln with Rosemary Cochrane, Peter Goodridge and Melanie Brown. I aim to get working in Scotland and hope others will share in my enjoyment of pots.

Slipware was the first type of ceramics I made at school, after seeing the potter's work in the mill in Wiltshire. I've always gravitated back to it, or the basic style of working even when making stoneware or porcelain work. Even when my work has a decorative angle to it I want it to be useful.

My influences include Mick Casson, Michael Cardew, Ray Finch and Joe Finch, also David Frith, having worked for him.

I am also a member of the Scottish Potters Association.